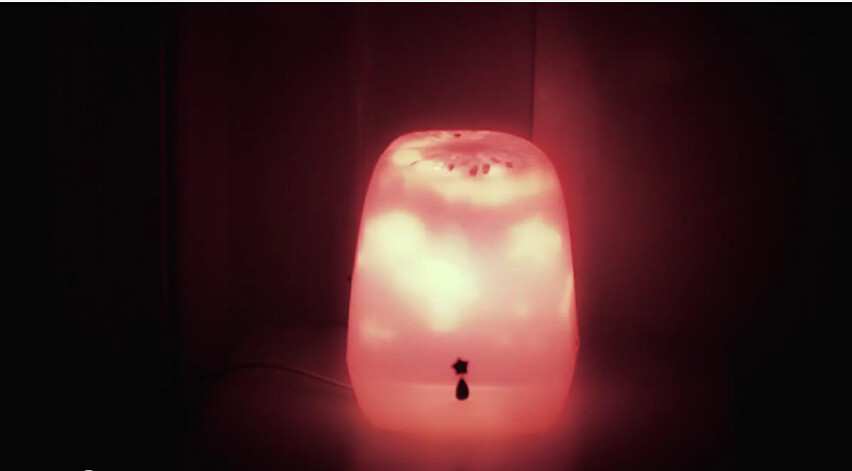 "What Happens When You Wake Up In The Night" is based on an excellent horror short story of the same name by Michael Smith.  This filmed version is almost a completely faithful adaption of the written work - preserving virtually every word of dialogue in the original - with one major exception, which we'll get to in a bit.  First, let's address the elephant in the room, which is the fact that you can't see anything in the room.  At first glance this story appears, due to the constraints imposed by the plot, to be one much more suited for a radio or podcast adaption (and it was in fact adapted in just this way by Pseudopod, although I didn't particularly care for the performer's voice).  After all, if there's only darkness to see, why bother showing that black screen at all?  And yet it succeeds here precisely because it's not simply a black screen but rather a darkened one; you can discern the forms of what is happening but only vaguely and with great effort.  It gives the whole effort a dreamlike - or, more properly, nightmarish - effect while leaving you just as confused as all of the characters about the topography of the new location.  The sound design is about as minimalist, although I could have done without the constant bird noises (assuming those were intentional).  Apart from that there is, of course, nothing more that can be visually analyzed because there is simply nothing else to see.


Which leads nicely into the main theme of the short: Nothingness.  This is not the first piece of horror fiction to take this subject by any stretch of the imagination; Harlan Ellison's "I Have No Mouth And I Must Scream" and Stephen King's "The Jaunt" ("it's longer than you think, dad!") are two of the more famous examples of this particular subgenre.  But the concept of being trapped in oblivion, of brain-death by boredom, is still a terrifying one and one that "What Happens…" augments using another tried-and-true trope, that of the completely unexplained horror.  That is, the awful thing that is happening is happening without any given purpose, explanation, or solution.  This is where the film makes its sole divergence from its source material - in the short story there's no hint whatsoever as to why the family has become stuck in limbo, but the film grafts on a "smell of woodsmoke" and an on-the-nose graveyard scene to make it pretty clear that the family died and is experiencing all of this in the afterlife.  I found this stripping away of ambiguity enormously disappointing, as part of what made the original stick out so strongly was the unresolvable, why-is-this-happening-to-us tension; it also fit thematically with the story as a whole, a non-resolution for a tale about nothing.


That said, it's unlikely that too many people are familiar with this particular short story, so it's probably more rewarding to criticize this film on its own merits.  While the new ending does resolve some of the questions, it by no means ties everything up neatly and as such still lends itself to some intriguing questions.  For instance, whether or not the family's situation is unique to them or if it will happen to all of us after we die (the great J-horror film Kairo, aka Pulse, also tackles some of these same issues to greater effect).  If this is the afterlife then the fact that these characters are not shown doing anything deserving of such punishment - and the fact that one of them is a little girl - means it is an afterlife that does not function on conventional morality.  Then there are the implications for their future; characters trapped in these kinds of null zones invariably wind up going completely insane but there's an awful added turn of the knife in knowing that they'll have to watch each other go mad at the same time.  Being powerless to save yourselves, to save your loved ones, or to even understand why this has been forced upon you; despite being shunted towards a cheap "twist" ending for the sake of an easier resolution, "What Happens When You Wake Up In The Night" still retains much of the same disquieting power in its filmed version that imbued the original story.