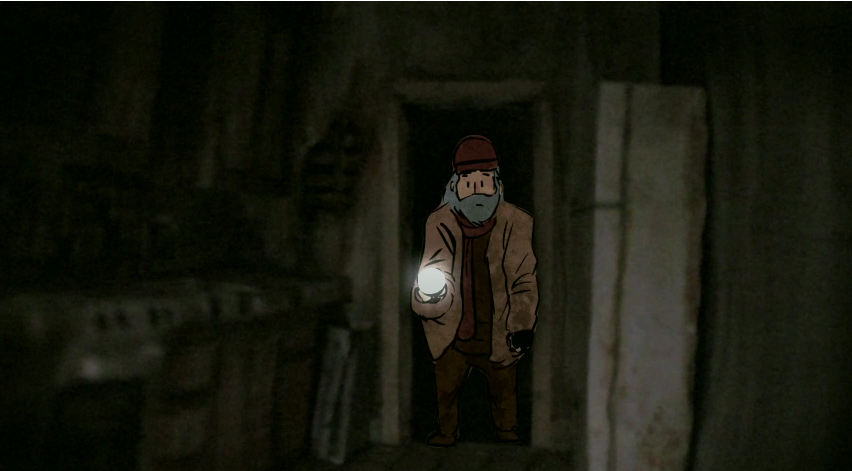 Midnight Snack is an updated version of a very old horror story.  I first heard it as "The Big Toe" in Alvin Schwartz's kiddy-horror collection Scary Stories To Tell in the Dark; Schwartz himself pulled all the stories in the collection from existing folk-horror tales, so the true origins of this particular story are probably quite ancient indeed.  Anyway, the version I knew was fairly different than the one depicted in the video, but kept the same basic beats: In the written story, a young boy finds a toe in his garden and eats it, thereby provoking the wrath of its supernatural owner.  Horror folklore tends to have this running undercurrent of unlogic (or perhaps more accurately, nightmare logic) - why was the toe in the garden?  why did the boy, after finding the toe, decide that eating it was a good idea?  why did the spirt wait until afterwards to reclaim his toe? - that Midnight Snack both prunes and heightens as it serves its story.  Three crucial changes ground the story more firmly in reality: The change in setting, from peaceful garden to a plausibly-haunted abandoned tenement building, the change in protagonist, from ordinary child to hungry hobo, and the change in the body part, from toe to heart.  The story thus changes from being a confusing tale of a creepy cannibalistic child to one about a starving man who finds and eats a piece of meat to stave off his all-consuming hunger, not realizing that it belongs to a vengeful spirit who haunts the room over some trauma long past.  While this grounding makes the eventual flip to spectral horror more effective, it does lose some of the creepy, "why-is-this-happening-to-me" weirdness of the original tale; horror is one of the few genres where sacrificing narrative cohesion can actually improve the effectiveness of the narrative.


That said, while the short may lose some "unreality" in the narrative aspect, that slack is definitely picked up by the visuals.  The video deftly blends traditional drawn animation (like the protagonist, the monster, and some of the backgrounds) with what appears to be real-life, small-scale models (like the doll and the furniture in the abandoned room).  Even if the latter components are not models but rather extremely detailed drawings, the juxtaposition between the cartoonish hobo and his photorealistic surroundings - especially since the photorealism is only introduced later in the short, after a completely-animated intro - has the disorienting effect of somehow making the "realistic" background objects seem unreal.  This disorientation carries over, albeit in a more subtle fashion, in the fade-to-black transitions between "scenes"; I'm putting "scenes" in quotation marks because the time between two fade-to-blacks is often as short as a handful of seconds and while a fade-to-black usually implies a time jump happened, the actual transition from one "scene" to another here is almost always one that should be instantaneous (for example: A door opens in front of the hobo, fade to black, the next "scene" opens with the hobo walking through the door - no real time has elapsed in between these two actions from the hobo's perspective.)  Then, when an actual time jump does happen (after the hobo eats the heart and takes a nap, only to be awoken by the monster), it is signified not by a fade-to-black but rather by dimming the lights on a picture.  The result is a schizoid timeline, where events can elapse immediately or pause indefinitely and time itself cannot be trusted.


Like time, space also is not to be trusted in Midnight Snack.  There is of course the magical mysterious self-opening door, but that's a fairly common horror trope (although the execution of that trope in this video - with the music cutting out and the door opening in absolute silence - is certainly quite good) and doesn't merit much analysis.  More interesting, though, is the shot where the hobo opens all the cabinets in a vain attempt to find food; we see this happen from the other side, i.e. inside the cabinets, and yet each cabinet must be sectioned off from the others, which means this shot is impossible unless the back of the cabinets open into nothingness.  Similarly, when the hobo runs from the monster the "camera" pans up and over the hobo and shows him pass through doors from an overhead perspective, another impossible shot unless the roof of the building is nonexistent.  After a harrowing run, the hobo crashes through a previously-solid section of floor (and through the door he kicked open earlier, which in a sense means he "opened the door" again, this time into a seemingly-bottomless pit); this is again a pretty common horror trope, but it's worth noting because he looks backwards to see if the monster is coming down the stairs and towards the pit, only to be pulled downwards by the monster, who was improbably already in the pit, waiting for him.  The final shot is the monster, suspended in featureless blackness, watching and waiting in a void where time and space don't seem to be present.  In this world, the abyss stares at you even if you're not staring back.


Midnight Snack, then, updates the classic folk-horror story by moving it into the present day and into an urban setting and by stripping it of its more bizarre narrative elements, but preserves the overall level of dream-horror confusion in its visual style.  One can only imagine what the Appalachian backwoodsman/French peasant/medieval bard/whatever-anonymous-storyteller who originally came up with the tale would think of how it has been adapted here; likely it would be a totally alien, confusing, and terrifying thing to them.  Which, all things considered, seems just about perfect.