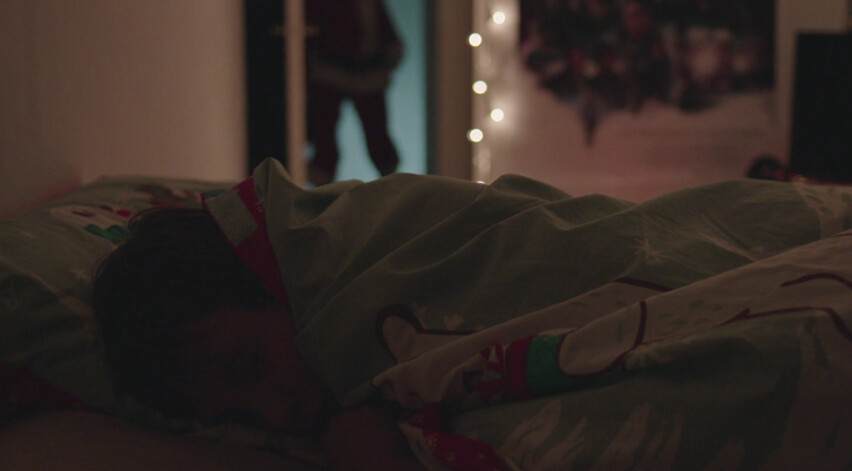 
It's easy to see how to pervert the idea of Christmas into something ugly and profane - the idea of a strange man essentially breaking into your house in the dead of night takes a certain innocent charm to appreciate, and when you strip that innocence away it just becomes creepy.  Of course "innocence lost" is a recurring theme of most horror films, especially those with children in major roles, and if the point of this short was simply to take a beloved icon and twist it into a ghoulish monstrosity it would have probably made for a fun b-movie "Killer Santa"-type short but nothing with actual staying power.


Where Here Comes Santa sets itself apart is the truly fascinating notion that the rituals we perform around the holidays are done not out of a sense of tradition but rather for a deeper, more sinister purpose.  Trick 'R Treat, one of the finest horror movie anthologies of all time (with one of the dumbest movie titles of all time) used this conceit to great effect with Halloween tropes; in its universe lighting a Jack-O-Lantern was actually a ward against evil and "trick or treat" was a compact you were making with an ancient, malevolent force.  Here Comes Santa applies the same logic to Christmas traditions, that putting out milk and cookies (and cats, apparently) is not a treat for Santa but a sacrificial offering, and that being asleep when Santa comes is not a case of good manners but of essential self-preservation.  This Santa isn't a benevolent old man who dispenses gifts to nice children; he's a babbling idiot-god who knows when you're awake and will make you pay for this insolence regardless of if you're good or bad.


This would be intellectually interesting but not actually very scary if it wasn't for how mechanically good the short is.  Keeping the Santa-monster's back to the camera initially is a nice touch that allows the filmmakers to imply he's eating the cat without actually having to make any special effects and although the monster's revealed face looks a little goofy in a zombie-meets-The-Grinch kind of way, its continual incoherent muttering makes the monster work, in that it shows that this isn't some serial killer dressed like Santa but some sort of awful predatory creature, divorced from humanity in every way.  The lynchpin of the affair is the long shot immediately following the fall of the Jenga tower (well, it's a long shot for a short film - and in fact, given that it's four-and-a-half minutes long, that 30 second shot comprises a full tenth of the film's running time, something that even Alfonso Cuaron can't boast of any of his movies); the sight of the kid under the covers and the Santa-monster slowly advancing towards him, both unaware of each other's exact position but extremely aware that each other exists, is almost Hitchcockian in it suspensefulness.  And the fact that the subsequent payoff happens in near-total silence (apart from the excellent, chilling monster scream at the very end) shows impressive confidence from the filmmakers in their ability to create a horrifying moment without the need for a jump scare, a confidence that pervades every moment of this wonderfully creepy short.