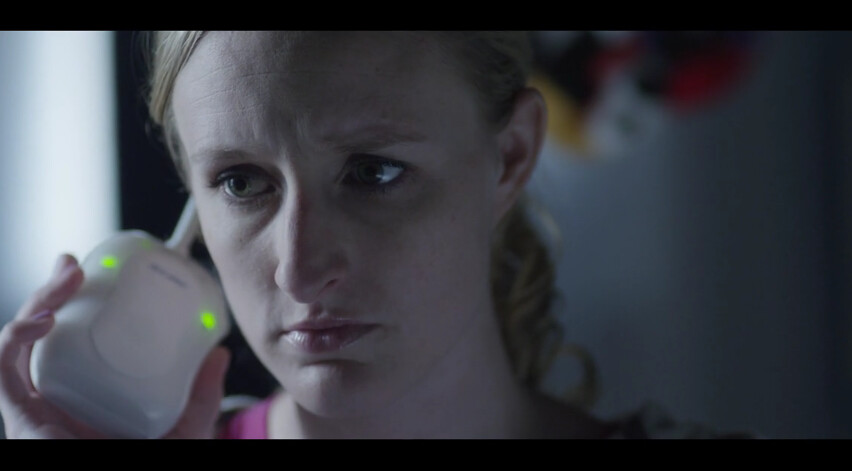 LOOK BEHIND YOU and the importance of sound design

LOOK BEHIND YOU is proof positive that when it comes to short horror, sound design is key.


Before we get into that, however, let's talk about a few things this short does wrong.  First off, the plot is incomprehensible - it basically boils down to "a bunch of scary sounds, followed by someone stealing a baby".  Furthermore the fact that the baby-stealer is clearly just a slightly-disheveled-looking woman really detracts from the whole affair because it both (a) makes her seem unthreatening (as opposed to if the filmmakers had broken out the makeup cabinet and actually designed a frightening monster) and (b) makes the entire setup confusing.  Why were there strange, supernatural noises if the villain was just some non-supernatural lady?  Conceptually the whole thing falls flat and if this was a short story it would be an unbearably silly clunker.


But film is an audiovisual medium and while the "children's toys positioned in a dark room so they look creepy" imagery is trite but effective, the true hero here is the sound.  The short starts out with a slowly-winding-down music box playing Rock-A-Bye-Baby; the "creepy slow lullaby" somehow manages to be the rare horror cliche that works every time and I've never really been sure why.  The best I can figure is the jingling chimes become discordant and strange as the song starts slowing down - the same reason there are so many haunted circuses and carousels in horror - and that, coupled with the fact that it's a supposedly-innocent children's song that is being twisted into another context, makes it scary.  Which doesn't explain why I find the music effective but the imagery (which plays off that same "innocence lost" theme) trite.  Whatever the case is, it works.


The next big sound, the one that causes the mother to turn around and look at the rocking-chair bear, is an interesting one.  It appears to be three noises played simultaneously: a door creaking open, a scream, and a sudden whooshing of someone running past.  The wonderful thing about this is that if any one of these sounds was played by itself it would cause a very explicit assumption about what the mother would see when she turned around (i.e. an open door, a screaming figure, or a running creature, respectively).  Play it all together, though, and you just get the impression of something being behind her without having a concrete idea of what that "something" is.  The title actually also helps with this, as you're primed going into the short that there will be something awful lurking just behind a protagonist at some point; the fact that the supposedly-awful thing is just a stuffed bear is a nice fake-out for the upcoming actual baby-stealing monster.


The excellent overall sound design of this short reminded me a lot of Fewdio, one of the first short horror troupes to make it big on the internet; this is fitting since, probably unintentionally, the next sequence with the baby monitor evokes Fewdio's excellent short Mockingbird.  I'm not sure why baby monitors aren't more widely used in horror as they allow for some very effective audio cues while also tapping into a pretty primal fear, the idea that some unknown force is doing something awful to your child and all you can do is listen.  Anyway, LOOK BEHIND YOU's baby monitor is, in a twist that is inexplicable plot-wise but extremely effective horror-wise, a stereo monitor - you can hear the noise jump back and forth from the left and right channels if you're wearing headphones.  The disorienting effect this creates would work as a setup for a jump scare and I'm very thankful that the filmmakers decided not to go that route.  Although the volume does go way up when the baby-stealer arrives, the camera wisely lingers on this for a few seconds so the full meaning of the title can sink in, then just as wisely cuts to black just before the mother does look behind her.


Of course, when she does look behind her she's just going to see another woman who she can probably take in a fight, seeing as they're both roughly the same build.  But the great thing about this short is that I only really thought about that several minutes after it finished, thanks to how brilliantly effective the sound design is.