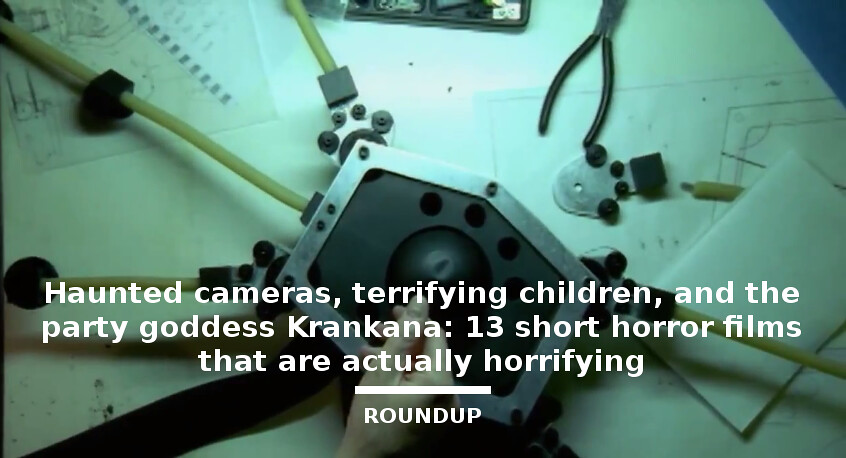 I'm starting things off with a silly premise executed brilliantly. Just some light jump scares and excellent atmosphere, to get you all in the right mood.

I'm generally not a huge fan of found-footage horror (with the exception of the excellent No Through Road) but I do respect that they made some efforts to justify why the camerawoman didn't stop filming and run away. Also it has a pretty nifty hallway jump scare (not really a spoiler, since you know it's coming for a solid 30 seconds).

Back in 2002, Eternal Darkness: Sanity's Requiem - one of the best horror games of all time - was released on the Nintendo Gamecube, and to promote this Nintendo created an amateur short film competition with the open-ended prompt of "psychological horror". The winner (and deservedly so, I watched the few other entries that still exist online and they don't hold a candle to this one) is the video above, "Unloved", which some kind soul recently reuploaded in HD.

As for the short itself: I love how it doesn't treat the central awful premise as some big twist revelation but allows you to figure it out for yourself… and then adds a twist, courtesy of one of the finest props I've seen in a short like this.

I don't think the ending was supposed to be quite as horrifying as I found it but man, I definitely agree with that newspaper.

There's a good chance this one won't grab you like it did me. Might even seem a little silly or boring. That said, the final image has remained stuck in my head like few other things have.

Click here for a more detailed analysis of this short.

A couple months ago, Fearnet.com shut down permanently. This is one of the few remaining vestiges of the hundreds of shorts Fearnet hosted; it's the first part of an otherwise-disappointing webseries that doesn't do much with Robert Englund and Kane Hodder. "Hydrophobia" still packs a couple good punches, though.

I found this while looking for sketch comedy videos and while it initially freaked me out, on a repeat viewing it's pretty darn goofy (on purpose, of course). But it still has some very nifty camera tricks and goes to a pretty fascinating place.

Somehow, I think the director of this short has seen Mama.

I'll be honest, the main reason this video is here is because the main actor's eyes are terrifying. Also Google Translate says "Autiotalo" means "The Shack" in Finnish, if you were wondering.

I think the actress here is some sort of Youtube celebrity but the real star is the other guy, who gives an absolutely magnetic performance.

This is my obligatory "good lighting and sound design can trump every other narrative detail" video.

I thought I had seen every possible permutation of this premise. I was wrong. This is great.

Click here for a more detailed analysis of this short.